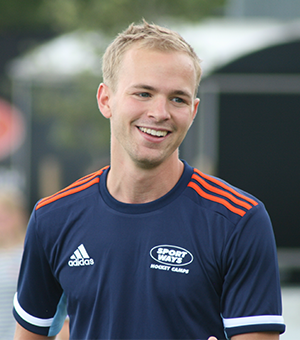 I will never forget my first SportWays hockey camp. I was twelve years old and played for Almere Boys U12-1 when I went to an overnight hockey camp in Amsterdam. I remember it like it was yesterday. It was the first time I saw the Wagener Stadium. I was super impressed and thought; what if I get the chance to play there one day…

A few years later, I made it to the Dutch National U18 team. At the same time, my assistant coach at Almere asked me to join SportWays again. However, this time not as a participant, but as a SportWays star. Because I have loved the SportWays camps from day 1, I decided to grab this opportunity with both hands!

Joining a camp as a SportWays star is exceptional. The energy you have to give the kids is intense, but the energy they give back to you is all worth it! Everytime I join a camp, I feel like a 8-year-old again. Playing hockey all day long is everything I ever wanted. At the SportWays hockey camps, I can do exactly that. Unlike my teammates, kids are always in for a panna battle and I love that! Every time again, another player, another battle. Kids are amazing!

My childish enthusiasm has never been judged at SportWays. When I join a camp, it is accepted. For one day, I can join kids games and be an 8 year old again. That’s amazing, every single time! Where am I allowed to play red light, green light as a 23-year-old? It’s amazing to see that kids absolutely don’t want me to win, whatever happens. Every game, they tell me I moved while I definitely didn’t. I will never win with these kids. It’s brilliant, we’re having so much fun together.

My goal is to give the kids the best day they’ve ever had. When I was younger, I played better when I had a lot of fun. In my opinion, that’s the most important thing for these kids. Giving energy, joining them while they’re playing hockey, making jokes and having a lot of fun is the combination which always helped me when I was younger.

Besides having fun, learning is also important at a SportWays hockey camp. Every kid has different expectations about a camp. Some kids just want to have fun, others want to develop themselves. Those who want to have fun are mainly the younger kids. That’s why I always try to adapt to these situations. But there are also kids who really want to learn something. I mostly try to teach them some defensive skills. I have to defend some of the best Dutch attackers during my own training. I always tell the kids that I don’t always steal each ball of those guys, but I always give them a hard time! The main story is to never quit and always challenge your opponent.

Besides the clinics and the games, I often play a demonstration (also known as a demo) with other SportWays stars or staff members from the camp as well. During these demos, we give everything we have and we always trying to create the most epic demo. Cool music, enthusiastic kids, a lot of excited staff members, goalies who try to stop every ball and attackers who try to make the most beautiful goals make these demos amazing.

Kids are hoping for that perfect shot on goal. As a hockey player, I’m 100% a defender and a shot on goal is nog my strongest skill. This means that, for me, every demo is a huge challenge. Demo pressure and stage fright, every time again.

Last year, at an overnight hockey camp, I played a demo. It was the biggest camp of the summer and together with other SportWays stars such as Thomas Vis, Terrance Pieters and Floris Kuiper, we gave an amazing show. The other guys were all typical demo players. Guys who can fire fantastic shots with their eyes closed. They can do tricks that I can only dream of. Despite that, we rocked it together and made an unforgettable memory for these kids! 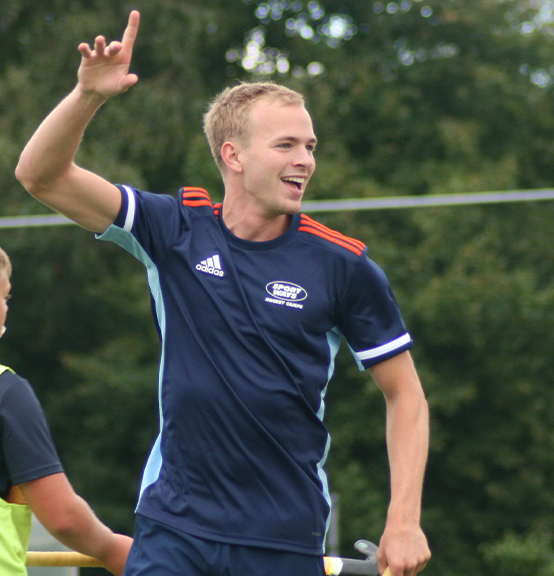 When the demo started, we were announced in front of 140 kids. One by one, we had to dribble to the circle and fire a shot on goal. I was fifth in line and really, really felt the pressure. Everyone who shot before me already scored. I got the ball, dribbled towards the goal and wanted to make a placed shot. But, just before I hit the ball, I decided to go for a different strategy: shoot as hard as possible. With all the power in my body I hit the ball. GOAL!!! A huge satisfaction spread throughout my whole body. I’ve only felt this much stress during our play-offs or other really important games. Wow this is a unique feeling. This was a good start. Let’s go!

I’ll never forget the fun I have during demos. But also the stress is something I will never forget. The feeling of a successful demo, the stress before and the fantastic feeling afterwards is unforgettable. The fun and the contact with the kids makes me feel like a kid again. SportWays is so much fun, so much hockey and lots of games. I will never get enough of it!

Do you dare to play a panna battle against me or want to play in a demo together? Join a camp and maybe I’ll see you there!